Last month Rory and I celebrated our 34th anniversary, which means that next year we will have been married for 35 years.  And that means that by anyone’s standards we are experienced at this thing called marriage.  Fairly often people comment to us that we’ve done a good job of it, that we seem happy together, or that we are a “cute couple.”  (This last always seems a little strange to me, because I don’t really think of 55-year-olds as being cute.)  But certainly we are very glad to have each other, and I know that many couples wish they could say that.  So here are a few musings on what I’ve learned over the years about the subject.  None of these will strike you as original, because they aren’t; I’m just reinforcing what wise husbands and wives have been saying for centuries.

First, the old rules really are non-negotiable.  Lying, cheating and hiding things from each other make wreckage of the foundation for intimacy, which is trust.  Without trust the relationship loses all its freedom.  Rory and I have always believed that integrity is not optional; you don’t mess with it if you want anyone, and especially your spouse, to trust and respect you.  Not that we’ve lived perfectly by any means, but that bedrock belief has protected us from the grief we’ve sadly observed in others.

Second, spouses need each other.  Rory and I got married before we had money or anything else, and neither of us had any illusion we could do well without the other.  We had to be there for each other.  If we weren’t, who would be?  Yes, we had our families, but they had needs of their own.  When we got married, we became family for each other, forming a bond stronger than what we were born into.  Now that our sons are married, we see them loving their wives with an attachment stronger than their old ties to us, and that is as it should be.  I see some couples basically living together but independently of each other, and I can’t help wondering if, deep down, they don’t really trust each other to be there.  I may be wrong—every marriage is different, and I’ve learned to be less judgmental of how other couples relate.  But I do wonder.

Third, I’ve learned that when you love somebody, you should act like it.  This is a no-brainer, right?  Apparently not, because a lot of people would swear to a marriage counselor that they love their spouse, but the spouse hasn’t seen evidence of it in years.  How can a wife feel loved when she is ignored?  How can a husband feel loved when he is ridiculed?  We have always tried (not with perfect success, but pretty well) to make it plain to each other that we’re glad to be together.  A smile, a respectful tone of voice, a compliment, an empathetic ear: these are small things but ultimately make an enormous difference, not only in our own lives but in the lives of our children.  One of my sons recently told Rory that he (Rory) had taught him by example how to love his wife.  I can think of few lessons more important than that.

So to anyone who’s interested, I offer this loving example from my good man.  Below you see two photos, taken 3 years ago in Hungary in what is called the Szépasszony Völgy, translated into English as the Valley of the Beautiful Women.  The upper one is of me; Rory told me to sit down and smile so he could photograph a beautiful woman.  Get it, men?  This is world-class nice.  The lower photo is one I took of him in the same valley.  Notice that the woman he is smiling at is me. I have this picture on my desk, and it remains my favorite shot of him. 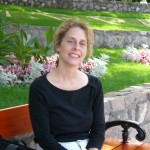 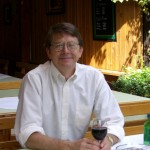 And one more photograph, which I include just because it is so irresistible.  This is me with our little granddaughter, Aydan.  See her beautiful smile?  It’s the result of a lot of love—the love that her family has shared with her, but also the love her parents have shown each other.  I rest my case. 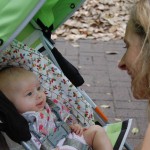