45 Years Together, No Regrets 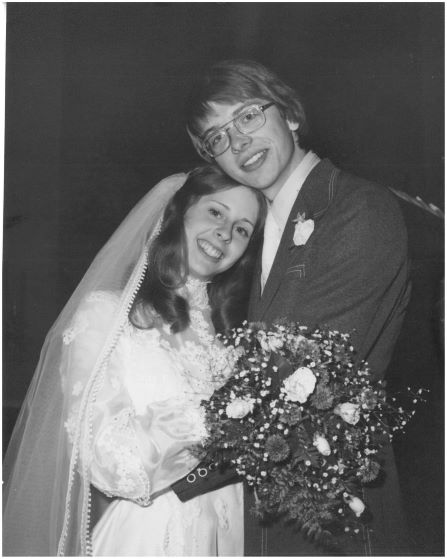 Forty-five years ago today Rory and I, as giddy 21-year-olds, got married. I can’t believe how quickly the time has past, but indeed it has. With three sons, eight grandchildren, and four-and-a-half decades together, we’re no longer giddy, but we love each other more deeply than ever. Eleven years ago, I wrote a post on what I’ve learned by being “experienced” at marriage, and today I went back and re-read that post. It still speaks to me. So I copied it below, in italicized text, and I hope it will speak to you, too. (The photo is not carried over from that post; it was taken just last December.)

Here are a few musings on what I’ve learned over the years about the subject of marriage.  None of these will strike you as original, because they aren’t; I’m just reinforcing what wise husbands and wives have been saying for centuries.

First, the old rules really are non-negotiable.  Lying, cheating and hiding things from each other make wreckage of the foundation for intimacy, which is trust.  Without trust the relationship loses all its freedom.  Rory and I have always believed that integrity is not optional; you don’t mess with it if you want anyone, and especially your spouse, to trust and respect you.  Not that we’ve lived perfectly by any means, but that bedrock belief has protected us from the grief we’ve sadly observed in others.

Second, spouses need each other.  Rory and I got married before we had money or anything else, and neither of us had any illusion we could do well without the other.  We had to be there for each other.  If we weren’t, who would be?  Yes, we had our families, but they had needs of their own.  When we got married, we became family for each other, forming a bond stronger than what we were born into.  Now that two of our sons are married, we see them loving their wives with an attachment stronger than their old ties to us, and that is as it should be.  I see some couples basically living together but independently of each other, and I can’t help wondering if, deep down, they don’t really trust each other to be there.  I may be wrong—every marriage is different, and I’ve learned to be less judgmental of how other couples relate.  But I do wonder.

Third, I’ve learned that when you love somebody, you should act like it.  This is a no-brainer, right?  Apparently not, because a lot of people would swear to a marriage counselor that they love their spouse, but the spouse hasn’t seen evidence of it in years.  How can a wife feel loved when she is ignored?  How can a husband feel loved when he is ridiculed?  We have always tried (not with perfect success, but pretty well) to make it plain to each other that we’re glad to be together.  A smile, a respectful tone of voice, a compliment, an empathetic ear: these are small things but ultimately make an enormous difference, not only in our own lives but in the lives of our children.  One of my sons told Rory that he (Rory) had taught him by example how to love his wife.  I can think of few lessons more important than that.

That’s what I said eleven years ago, and I still believe it. To younger couples, I would also add: Be understanding. Our spouse faces as much pressure as we do. Be patient. Most problems can and will eventually be resolved if we don’t let anger make everything worse. And be loving. Love is what started us down this road, right? After forty-five years, I believe more than ever that it’s worth it.