A Holocaust Story from Nine Suitcases: Given the Chance to Escape the Python’s Throat, Would We All Take It?

Here is a story from Béla Zsolt’s holocaust memoir, Nine Suitcases. It is a striking account of some Jewish prisoners who were given a chance to escape . . . and chose not to. The story, for me, is a poignant reminder that some things can be stronger than the fear of death. One is family loyalty; another is the fear of being alone. The story, taken from Chapter 12 in Zsolt’s book, goes like this:
In the spring of 1944 a large group of Hungarian Jews, Zsolt among them, was being detained in an enclosed ghetto in Nagyvárad, Hungary. The town was five kilometers from the Romanian border (and in fact is now part of Romania). The Jews knew that very soon they would be forced onto railroad cattle cars and taken to Auschwitz. Because of the harsh treatment they had been receiving, and also because of suicides, many had died; and during this time of waiting, about fifty men were assigned to bury the dead. 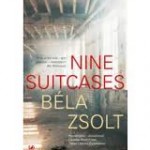 As it turned out, the gentile gendarme supervising the gravediggers was a decent man. He disliked the injustices against the Jews and feared the retaliation that his family would face when the regime changed after the war—as he knew it would. So one spring day when the gravediggers finished their work at the mass grave, the gendarme said to one of them, a man named Friedländer, “’Listen . . . tell these people . . . if they want to disappear they should go . . . Nobody has counted you. There’s no register. Now you’re like hay. The cart doesn’t stop if some falls off. But only smart people should go, because if you’re caught you’ve had it.’
Freidländer told the others, and as Zsolt puts it, “They conferred in wary whispers. What if he was trying to trick them—they would start and he would shoot them. And even if he meant well . . . they would be caught after ten steps. . . . Even if they got as far as the border, which was indeed only five kilometers away, how would they steer clear of the border guards? . . . And if they weren’t polished off by the Romanians, what would happen to their families in the ghetto? They couldn’t leave their families, parents, children, wives, behind without a man. Of course they could do nothing to help at the moment, but all these dependents would be lost if they were taken away somewhere without the men. And even if it was true that families would be split up and sent to separate camps for men and women, what would the family in the ghetto say if the husband or father escaped alone?
“Only one gravedigger, the red-haired Grosz, said that he was going to escape. . . . He tore off his yellow star behind the bushes and stepped out on to the road. He walked down the road, at first rather unsteadily, then more confidently, slowly, then faster and faster until he was almost running. The gendarme turned his back to him, the Jews watched him spellbound.”
And what happened then? As Grosz hurried on toward the border, he became more and more afraid at the sight of each passer-by, even though these people did not stop him or threaten him. Indeed, one even encouraged him, told him how to reach the border. But Grosz was paralyzed by the fear that he’d be captured—and by the fear of what he would have to face alone if he weren’t.
He turned back. He ran back. With great relief he joined the gravediggers being led back to the ghetto to await the cattle cars. In Zsolt’s words, “Grosz, pushing his way to the front, slipped in almost in ecstasy, like a mesmerized rodent into the python’s throat.”
This is the kind of story I would scarcely have believed when I was twenty, but now I understand it, sympathetically recognizing the impulses. There is a reason people band together in families, in communities. Although Zsolt seems to tell this story with bitterness, as a commentary on cowardice, I think it is also a demonstration of the deeply visceral way people need each other.
Life is not meant to be faced alone. And neither is death.