A Lesson in Wisdom From a Friend Fighting Cancer

On May 4, 2015, the Tacoma News Tribune published this article I wrote about my friend Janis Lindley, who is handling cancer treatment in a way that inspires all who know her.  Here is the text of the article, along with some photos.

About a year ago my friend Janis Lindley, then 61 years old, was diagnosed with breast cancer.  The cancer was not in an advanced stage, but neither was it curable by surgery alone.  Janis began an exhausting barrage of experimental medication and then had surgery. She is now on chemotherapy, and if ever there were a “poster child” (okay, poster adult) for chemo, Janis would be it.  In the mornings she pulls her tired, bald self out of bed and goes to the YMCA for her aerobic dancing class.  It’s counterintuitive to be dancing with cancer, Janis says, but the exercise makes her feel better. 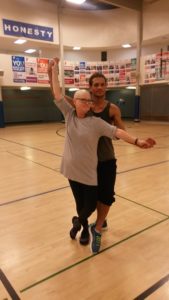 For most of us women, it’s also counterintuitive to be going out in public when we’re likely to be looking our worst, but Janis has learned to view this differently.  She accepts her new hairlessness.  She doesn’t wear a hat unless her head is cold, doesn’t wear a wig unless it’s April Fool’s Day.  At the YMCA, she has served as an inspiration—and no doubt also a reassurance—to the other women.  Even with cancer it can still be possible to dance, smile and hold up one’s bald head.

“Chemo and baldness have helped me shed some of my pride,” she says, “and it has been replaced by dignity.”

I have been mulling over Janis’s wisdom ever since she told me that.  Note to self: trade in pride for the self-acceptance called dignity.

Early on, Janis found out how difficult cancer treatment can be.  She realized fear would not help her.  Joy would.  She decided to use whatever strength she had for doing things she loved.  Though at times it has not been easy, she has done that.  A talented artist, she has continued drawing, painting and giving some art lessons.  With the help of her husband, Chuck, she cares for her little granddaughter every weekend.  In medical waiting rooms, she has read the contemplative writings of Henri Nouwen, a Catholic priest who devoted himself to serving the mentally and physically disabled.

She tries to keep a sense of humor and put others at ease with her condition.  Her family has helped with this.  When Janis went bald, her son threw a “buzz party,” and some of Janis’s friends and family members shaved their heads.  On many days Janis has felt sick, but she has not felt alone.

Her doctors are amazed by how well she is handling treatment, and her prospects seem very good.  But with cancer there are no guarantees.  Janis and Chuck make the most of today and they pray for many tomorrows.  I pray for Janis’s tomorrows as well, as I reflect on what she has taught me about letting go of fear and choosing joy, letting go of pride and choosing dignity.

And while we are on the topics of pride and cancer, another story comes to my mind as well.  Last summer I attended a writing seminar on characterization.  To help us understand our characters, the seminar leader told us to look back on our own lives.

“What are your proudest moments?” he asked.

Thinking he meant big accomplishments, I drew a blank.  Then he gave us his definition of proud moments:  those times in life when we got things right.

“I’ll tell you what my finest moment was,” he said.  “It was when my wife was dying of cancer, and I stood by her the whole time.  I got her through it.”

This was when he was at his best.  As a caregiver, he loved another person through cancer.  Despite the heartbreak, he could look back on his actions with a kind of pride.  He got it right, and he knew it.

My friend Janis is getting things right.  She calls this dignity; she doesn’t use the word pride.  But I can say it: I am proud of her. 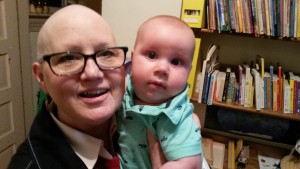 Janis with my grandson Rory. Who says beautiful people have to have hair?