Our family has expanded again!

On November 9, 2016 Joel Archer Connally was born in Curahuasi, Peru.  Our new grandson weighed eight-and-a-half pounds at birth and has been growing exponentially since then.  He is strong and happy, with beautiful resemblances to both his grandfathers.

Joel’s parents, Brendan and Erin, are missionaries.  Brendan provides linguistic, educational and ministry support to Peruvian churches, and Erin works as a dentist.  Joel’s older brother, Oliver (Olly), is three years old.  Like Olly, Joel will grow up with three languages.  He will be both American and Peruvian–in citizenship, in cultural understanding and in loyalties.  That’s a large mantle for small shoulders, but the boys are children of God, and they’re strong. 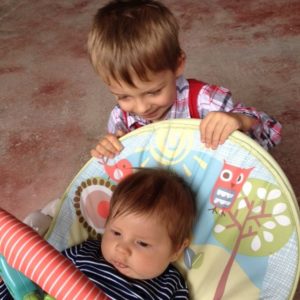 Rory and I recently visited Joel, Olly, Brendan and Erin in Abancay, their Andean home.  It was a week of jostling over hairpin-turn roads, walking in the sunshine (in January it’s summer there), drinking Peruvian hot chocolate, exchanging belated Christmas gifts, buying vegetables at the market, singing with Olly, and falling in love with Joel as we rocked him to sleep.  We ate ice cream at the heladeria, joined Brendan and Erin’s friends for a volleyball game–and, yes, finally saw Machu Picchu.  People say the Inca site is breathtaking, and it is.  But nothing compares with the mountains under it, around it, above it. 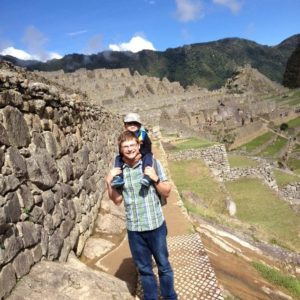 Brendan and Oliver at Machu Picchu

But since I’m making comparisons, the most amazing thing truly is this–a beautiful new child has entered our lives.  At the Quechua church Brendan and his family attend, the pastor prayed a blessing over Joel; and though my Spanish is limited, I had the privilege of reading the verse of Scripture Brendan and Erin had chosen: 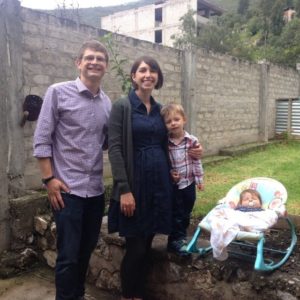 Este es el niño que yo le pedí al Señor, y él me lo concedió – I prayed for this child, and the Lord has granted me what I asked of him.  I Samuel 1:27

Joel, welcome to the world and to the family!