After Many Years, a Return to the Midwest–With Books

When I was a kid and an early adolescent, I lived in one of the plainer and more modest houses in the upscale community of Wilmette, Illinois. I moved away from the Midwest at age 14 and had never been back since — until this month. When the opportunity arose to do a few speaking engagements and book events in the Chicago area, Cleveland and Kalamazoo, my husband and I bought our plane tickets. Though Rory was tired from previous traveling and I was a little nervous,  we decided to take this trip with a sense of adventure. It turns out we loved our time in the Midwest, and much of that has to do with the old friends and new along the way. 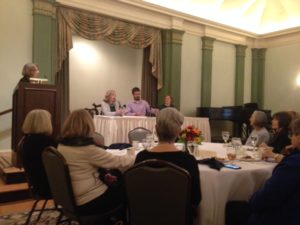 Friends of American Writers, where I was a panelist with two other historical novelists. At the podium is Roberta Gates.

In Chicago and some of its suburbs, I spoke at a luncheon of the Friends of American Writers, at a meeting of the large and very well-read Flossmoor Book Club, at the Riverside Library, and in a gathering of readers in the home of my friend Roberta Gates.

Roberta, in fact, had arranged for me to speak at the other venues as well, and I am deeply grateful for her help. She is truly a “connector.” Besides setting up these meetings, she also e-introduced me to Steve and Susie Kovic, wonderful airbnb hosts in Oak Park, and set up a walking tour of Frank Lloyd Wright buildings with guide Lois Starbuck. She and her husband served us a lovely dinner in their home. 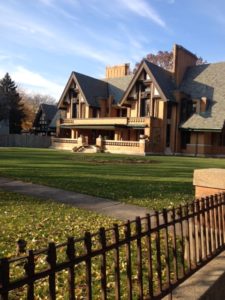 Roberta also took me to lunch with two friends, one of whom is Hungarian and cooked delicious goulash and palacsinta (crepes) for us. Louise Katona, the Hungarian, had read my book and told me that it had resonated with her as true, both in the facts and in the emotional nuances. It is hard to express how much her words meant to me. To write fiction set in a country not my own is to tell someone else’s story, and for much of the time I was working on The Songs We Hide, I kept asking myself, “Who am I to write this?” Louise’s comment was a great reassurance.

Another interesting conversation was with Christine Vernon, an Oak Park writer who has tirelessly advocated for the preservation of her town’s aesthetic ambiance. she drove me around town to show me what she was talking about. Both Christine and Roberta are people I “met” via email before ever meeting them face-to-face. As irritated as I may get with technology, I love the way it opens doors. 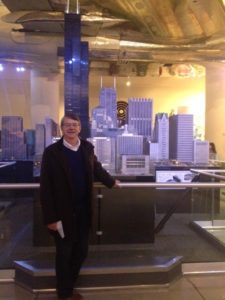 Rory in front of the model train set’s “Chicago.” At the other end of the line is Seattle!

While we were in the Chicago area, we drove to Wilmette, and finally (after 42 years of marriage) I got to show Rory where I used to live. We walked past my old house and down the alley where my brother and I played with the neighborhood kids. We drove by my old school, then we had lunch in the small downtown where some of the old businesses are still operating. We visited Chicago’s Museum of Science and Industry, talking about how our grandsons would love the huge model train set-up. It’s strange leaving a place as a kid and returning as a grandparent. Funny, I think I appreciate Wilmette and Chicago more now. When I was 10, the place was just big and flat. Now it’s big and flat and fascinating. 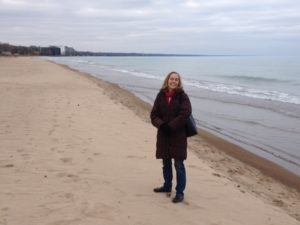 We walked the chilly Wilmette beach, and Rory had his first real view of Lake Michigan. He loved seeing a freshwater body of water so huge you can’t see across it. When I was a child it was easy enough to pretend it was the ocean.

After a few days in Chicago we drove to Cleveland, where I had a speaking engagement at the Cleveland Hungarian Museum. Historically, Cleveland has had a very large Hungarian population, and I was so glad to be able to present my book to people who would identify with it, ethnically and historically. The museum volunteers were very welcoming. One of them, Eva Szabo, opened her home to us. We spent the night there and enjoyed talking with her. The people who attended my presentation were a wonderful audience, asking great questions and adding observations of their own. 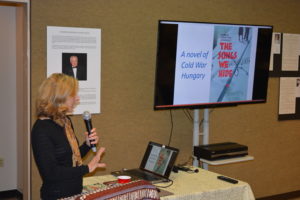 Like Louise Katona, they were surprised that an American with no Hungarian roots would research and write their story. They said they felt honored. Again, I can hardly put into words how much their gratitude meant to me.

After Cleveland, Rory and I drove to Kalamazoo, where we stayed with our friends Walt and Gretchen Erhardt. Unfortunately, by this time in the trip I had forgotten all about taking pictures, so I don’t have a shot of them, but here’s a quick sketch: the Erhardts are recently retired teachers and lifelong Lutherans, and I have rarely met a couple who live out service and hospitality so naturally. Rory and I loved the goodness of their home and the long conversations at their dining table. 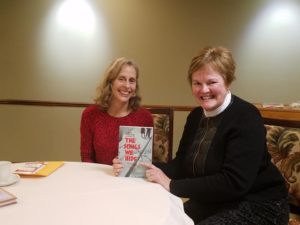 Gretchen had arranged for me to speak at a retirement community. She invited a number of her friends from outside the facility, and I was also delighted that Bob and Noel Seif from my old MFA  community also came. Whatever stereotypes may exist about people in retirement homes, this presentation turned out to be a gloriously lively discussion.

While in Michigan, we had dinner with another writer friend, Cynthia Beach, and her husband, Dave. Cynthia is a teacher and has a deeply encouraging way of interacting with other writers. In the spring she will publish a book titled Creative Juices: A Splash of Story Craft, Process & Creative Soul Care. She and Dave will also lead a retreat combining writing and spiritual formation. Check out her website. 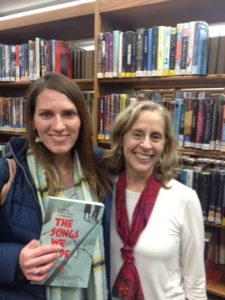 Debbie King and I in Riverside, IL

Back in Chicago before we flew home, I had two more public book events, one at the Riverside Library and one with the Flossmoor Book Club. Both were a real pleasure, and in Riverside I had the added joy of seeing yet another friend from my MFA program, Debbie King. Debbie is an editor with Tyndale House and a sensitive writer of children’s stories, and  I look forward to following her career.

The Flossmoor group was amazing: a book club that has been meeting for decades, and they have about 100 members. They also keep an impressive library and do monthly book reviews. This group truly loves reading, and it was an honor to speak to them.

When Rory and I first embarked on this trip to the Midwest, it was with some trepidation. We didn’t know what to expect. Now, after our ten days there, we’re talking about going back. A road trip, we say. We have to see these people and places again. My deepest thanks to the friends old and new who helped us, welcomed us and made this trip so special.