An Act of the Soul: Thoughts after attending The Glen Workshop

This blog post is sympathetically dedicated to all artists, especially writers, who have ever wondered if they are wasting their time.
I spent June 12-18 at Mt. Holyoke College in South Hadley, MA, attending an arts gathering called The Glen Workshop, a yearly event organized by Image Journal http://imagejournal.org. The journal, which takes its name from the poetic Biblical story of man being fashioned in God’s image, showcases and honors contemporary literature and art that is informed by faith. At the heart of both the journal and the workshop is the understanding that a believer’s art, whether it is serene, edgy, exultant or mournful, will in some way bear the imprint of God. Since I am a Christian writer, this idea stirs hope inside me. And I have to admit it also stirs my doubts when I have to revise, edit and throw away my work. (If God is behind all this, why does it take fourteen iterations to get it right?) 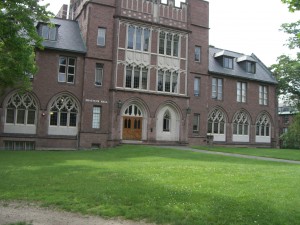 Shattuck Hall at Mt. Holyoke, where our fiction class was held

But at the Glen it was the hope that was palpable. All around me were writers, visual artists, musicians and dancers who believe that creativity is not just an occasional good idea but part of our fiber as we bear (however imperfectly) the image of God. The expectation at the Glen, stated and unstated, was that we would draw out each other’s strengths. And we did. I have attended quite a few writing classes, conferences and critique groups over the years, and I’ve never been to one as honestly nourishing, supportive and artistically helpful as this one. More than I’ve ever seen before, egoism was laid aside as irrelevant. As it should be, when the real motivation is the call of God.
Wait, did I say call? Hold on. Isn’t it a little presumptuous to say that God has called us to this? Let’s not put words in the Almighty’s mouth. Besides, many of us (perhaps most) who write or produce other art have dealt with a whole undertow of disappointment and discouragement. If we are called to art, why haven’t we found a little more success with it?
In answer (sort of), I’d like to return to my dedication line at the top of this post and share how my tired perspective has lifted since this week at the Glen. If you’re another tired artist, I hope yours will be lifted as well.
First off, if there‘s any writer who has ever wondered if she’s wasting her time, that person would be me. I have spent thousands of hours researching, writing and revising the historical novel I finished and the one that I am writing now. In the time it has taken, I could have acquired a master’s and perhaps a PhD. But what I have acquired instead is . . . writing practice. When I began writing the first book, I knew publishing was difficult, but I hoped that if I worked very hard with a very interesting topic and was very patient, my book would eventually be published. Now, six years and an economic downturn later, this is what I’ve learned: publishing is out of my control. I could spend the rest of my life perfecting my craft and still not find a readership other than a few friends and relatives.
So if hardly anyone is going to read what I write, what’s the point? Writing without readers can feel like talking into an unanswered telephone. Yes, I have enjoyed the work passionately, but is there any justification for spending so much time on something that benefits no one but me? If we speak of being called to a task, does the passion alone constitute a call? Or should people like me hang up the unanswered phone and move on?
The question of calling came up one morning in the Glen fiction writing class I was taking from Bret Lott, a wonderful writer and perceptive Christian. Bret and others in the group said that we write because the impulse for expression is part of us. I nodded, thinking of how I had kept writing during difficult times because to quit seemed even harder than to continue. Writing was not just a habit, it was part of me. Later that day I was discussing this with an excellent writer in the group, Peter Stockland from Lachine, Quebec, whose first collection of short stories will be published this fall. Peter said his sense of calling came from a certainty that the writing of stories was part of his DNA, something that had been programmed into him. He did not brag about this, anymore than a person would brag about being right- or left-handed. But neither did he question the call. He accepted it. This was an instructive example to me.
I heard variations on that same theme all week long from others at the Glen: “I write/paint/sing because it’s in me, deep down, to do that,” people said. And I said it, too, and meant it. I had been hesitantly guessing at this for several years now, but in the creative friendship of the Glen I was finally able to affirm it. All of us there had been working from an inner yearning to create, to wonder, to tell a beautiful truth, and in so doing we had been deepened. We had ended up on God’s territory.
Perhaps the call to art is not so much a divine command as a divine invitation, an offer, a beckoning. I’ve said yes, not always realizing what I was saying, and I’m glad now for all the time I “wasted” in continuing to say yes. I will keep on writing. For me, it has become an act of the soul.