The main reason I haven’t written on this blog in so long is that I have been doing homework.  Seriously.  In spite of being well outside the traditional college demographic  (here I am referencing my gray hairs and my 4-going-on-5 grandchildren), I am back in school.  I just finished my first semester of the Whidbey Writers Workshop, sponsored by 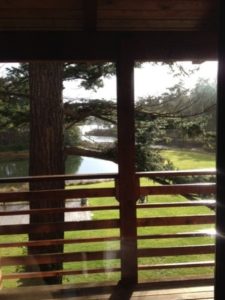 the Northwest Institute of Literary Arts (NILA).  The Workshop is a low-residency MFA program in creative writing, and my genre emphasis is fiction.  The program, which is accredited, was organized not by a university but by a group of writers.  The MFA program is rigorous and requires plenty of hours every week.  But doing this program is very different than sitting in college classrooms.

Each semester begins with an intensive 10-day residency session on Whidbey Island, not far from Seattle, and I had my first residency in January.  Our classes met in an old inn—some in the creaky, log-beam dining room, and some in the out-buildings that took a while to heat up in the mornings.  We showed up for class in our coats, scarves and gloves, carrying coffee mugs.  One of my classmates brought her dog. Most of my classmates were other MFA students, although some had come just for one residency session. In this chilly, forested setting I could almost imagine that this was a retreat . . . except that I had done such a huge load of preparatory homework, and now we were discussing none-too-simple stories by the likes of Faulkner and Katherine Anne Porter.  The fiction classes generally met in a little out-building called the Woodshed.  The name amuses me, because it used to be that “a trip to the woodshed” with your father meant you were about to be paddled.  At the NILA residency we didn’t do spankings in the Woodshed, but we did critique manuscripts there, which can often provoke the same feeling of “Uh-oh, now I’m in for it.”

In the mornings we had academic classes in literature, writing craft, and critiquing.  Afternoons were full (very full) of seminars on technique, literary trends, publishing (both self-publishing and traditional), and survival as writers.  In the evenings there were readings, sometimes by faculty members and sometimes by students.  After the readings we all went back to our desks and prepared for the next day.  Residency was exhausting, but it was also exhilarating.  (And I have to add that I don’t always describe writers’ gatherings that way.  I’ve been to numbing conferences where hundreds of people sat in a big rented room while an editor talked about stupid mistakes writers make.  It’s about as exhilarating as a paddling in the woodshed.)  Here in the NILA program there was excitement and camaraderie of creative work going on in our midst.

After residency was over, we all went home and did the rest of the semester on line.  I missed the face-to-face discussions in the “classrooms” of the old lodge, but I grew to like the online discussions with my teachers and classmates.  I enjoyed the readings and the posted lectures for my fiction craft class, which was taught by Wayne Ude, the MFA program director.  The class gave us excellent practice in literary analysis, and I saw new possibilities for technique in my own writing.   My other class was a fiction workshop taught by Bruce Holland Rogers.  In that course we submitted original short stories or novel chapters for the class to critique.  The students would all make observations and suggestions, and then Bruce made final comments aimed at helping the author while benefiting the rest of the class as well.  I think we all became better not only at writing but also at critiquing. I was impressed with how much thought people put into reading and commenting on each other’s work.  Giving and receiving criticism can be difficult, and it is all too easy to give insincere praise (because it’s momentarily easier), or to get snarky (because we’re too impatient to be thoughtful) or to get defensive.  Our group took the high road, and I give credit to Bruce and the rest of the NILA faculty for setting a tone of mutual respect and helpfulness.  That kind of tone is crucial for people who are doing something as difficult as writing fiction.