Desperate Bulgaria: Gleanings from Miroslav Penkov’s East of the West

Recently I read East of the West: A Country in Stories by Miroslav Penkhov. The book is a collection of short stories by a Bulgarian writer now living in the U.S., and all of the stories deal with Bulgaria and its people.  Penkov’s English prose is more precise and visionary than that written by 99.97% of native English speakers, and as I read I was struck by how the artistry of the book kept me reading, although the subject matter was often repelling.  Just to give you a glimpse what life is like in a country where crisis and upheaval are business as usual, here are some of the stories’ plot lines: 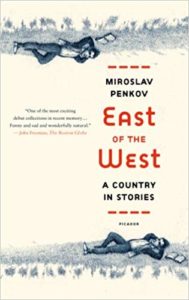 Depressing reading?  Yup.  This isn’t a book you read for light entertainment.   But in spite of the repugnancy of the material and often of the characters, the stories are poignant, strong and beautifully written.  What especially comes through–somehow, surfacing through the grit and the squalor–is the author’s deep love for his troubled homeland.  These stories are not only fine examples of short fiction, they are candid yet affectionate portraits of a torn country.  I especially recommend the stories in East of the West to anyone wanting insight into the catastrophic turmoil of the Balkan region.