For Those of Us Who Have Never Stopped Thirsting to Learn

My article that appeared in the Tacoma News-Tribune on Sept. 7, 2015

Today is Labor Day, which in America means the start of school.  I spent years on a school schedule, first as a student, then as a mother of students, then as a teacher.  Now that my first grandchild is about to start kindergarten, my eye is on the academic calendar again, but not only because of her.  A year-and-a-half ago I began graduate school, studying creative writing. 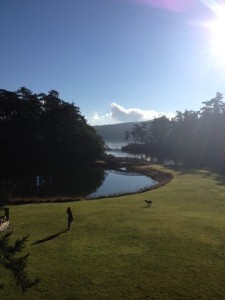 Whidbey Island, near where my graduate residency meets

I am not alone in starting back to school later in life.  Some of my classmates did, too.  My program with the Northwest Institute of Literary Arts (NILA) is low-residency: each semester begins with an intensive (read, exhausting) session on Whidbey Island, but the rest of the term’s work is done on line.  Since the program doesn’t necessitate moving or giving up a job, some of the students live as far away as central Canada, Georgia and even Dubai, and most are older than the traditional college age.

Some are much older.  At our most recent commencement, half of the graduates had gray hair; and one diploma, sadly, was awarded posthumously.  These people studied with NILA not so much to advance their futures but to fulfill a creative longing that had been with them for years.  As I listened to them read from the impressive novels and poetry collections they wrote as thesis projects, I was thankful to be part of a learning community that knows no age barrier.

I know from my own experience that the decision to return to school in the autumn stage of life can feel awkward and out-of-sync.  When I applied to graduate school in my late fifties, my family and friends were very supportive.  My own impulse, however, was to be self-deprecating, to say I should have done this years ago, to joke that if I had got things right earlier in life, maybe I wouldn’t have to do all this cramming now.

But I as I began my studies, I realized there were advantages to being an older student.  Although my memory is not as quick as it used to be, some kinds of thinking are actually easier for me now.  I make mental connections by drawing on years of reading, going places, talking with people, and watching the world.  Years of living.  These days, when I read about Vladimir Putin, I think of conversations I’ve had with Eastern Europeans, and then I am unsurprised by Putin’s Russia-über-alles stance.  When I hear about urban crowding, I remember seeing the endless apartments and hopelessly clogged traffic of Manila.  When I try to understand ineffective governments, forgive me, but I think of fruitless meetings I’ve sat through.  Perhaps most significantly for a fiction writer, when I need to create young male characters for my stories, I think of the teenage boys I taught and especially the sons I raised.  There is a kind of understanding that comes only with having cared so deeply that you’ve lost sleep, cried, worked, yelled, prayed, and felt an impossible joy.

Perhaps that’s why I and especially my classmates in their sixties and seventies have undertaken such huge writing projects.  By this point, all that we have absorbed in life is aching to be expressed.  Call such writing a bucket list venture if you want, and in some ways perhaps it is.  But it is also a love effort, creating an opus magnum from a lifetime of the soul.

Yet I also understand as never before that thought and creativity don’t have to spend decades waiting.  Some of my most talented classmates are young.  What will they accomplish in the many years ahead of them?  And my little granddaughter, so enthusiastically beginning school—what will be her greatest work?  It’s exciting to ponder what can happen in a life of eager learning.