The first Monday in April my husband, Rory, and I took a hike with our son Brendan outside the Andean village of Kurawasi.  Though this is generally a dry region, the area was very green and astonishingly beautiful with new growth after its rainy season.  Down there, a little south of the equator, summer was just ending, so our hike was in the fall . . . but I think of it as the loveliest spring walk I ever took.  Brendan says this hike is one of the most popular in Peru. 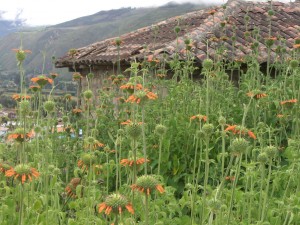 Leaving Kurawasi for the upward hike. I haven't seen these orange flowers here in the US, but they are common in Peru. The stem grows directly through the blossoms.

Kurawasi (or Curahuasi, in places that use the Spanish spelling) is a Quechua name meaning “priest’s house.”  The town has about 5,000 people, and there is an excellent mission hospital where my daughter-in-law works as a dentist.  To get to our trail for this hike, we walked out of town on some dirt paths leading past adobe houses, chickens, pigs and Quechua ladies waving from their chicken yards.  (They call Brendan “doctor,” even though he isn’t one.)  Arriving at the trail, we began to climb.  And climb.  And climb.  Below us we could see the town and the fields of Kurawasi.  When we reached the top and looked down the other side of the slope, we saw stark, rugged wilderness.  Here are some of the sights from this beautiful place: 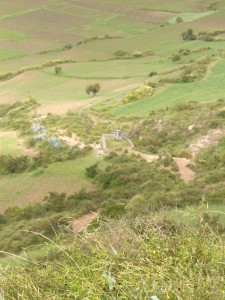 Looking down from the hill, toward the fields on the "domestic" side. 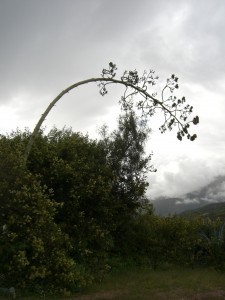 This isn't a tree. It's the blossom of a giant cactus. 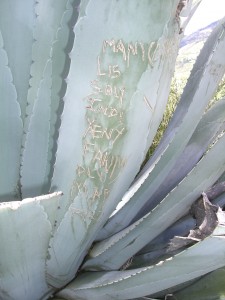 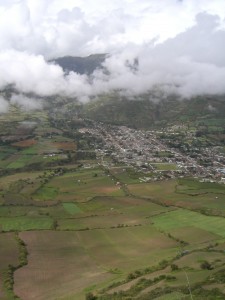 Looking down toward Kurawasi.Brendan Connally at the top. 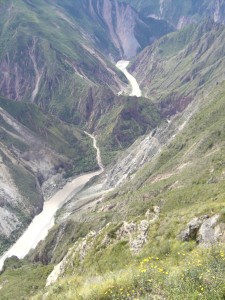 This photo looks down on the "wild side" of the slope. It's a huge gorge with the Apurimac River at the bottom. Believe it or not, some people pasture their animals near here and even have small houses in conditions not much milder than this.

The altitude at Kurawasi is about 8,000 ft, and our bodies noticed it.  Walking on level ground is no difficulty, but climbing steep terrain is definitely more effortful there, and anyone wanting to hike in the Andes should allow some time to get acclimated.  The other thing we discovered (the hard way) is that in the thin air there isn’t much shielding our gringo skin.  In no time our faces had acquired flaming sunburns.

Still, this hike was glorious, and as I think back on the view from the top, I still feel a sense of wonder.