Les Mis, Played Out and Lived Out

This is the text of my recent News Tribune article about a high school musical production that was not only a joy for the audience but transformative for the school community.

In May Stadium High School transported me to nineteenth-century Paris—violence, poverty, pathos and all.  The school staged an ambitious production of the musical Les Misérables.  Two months later, I am still humming the music and remembering the loud standing ovation.  I loved the beautiful production, but what struck me even more deeply was the way the young cast lived the story’s redemptive message all spring. 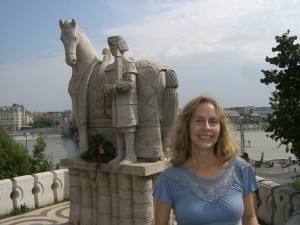 Les Misérables, or “Les Mis” as it is often called, is based on Victor Hugo’s sweeping French novel of social upheaval and personal courage.  It tells of Jean Valjean, an oppressed prisoner who went on to extend grace all around him, even forgiving the man who had caused his greatest suffering.

“It’s the greatest musical of all time,” says director Liz Jacobsen.   “The message is still needed.”

When Liz chose Les Mis, she knew the task would be huge.  With almost all the dialog sung, the show is essentially an opera, and the music is especially challenging for the lead characters.  The cast is large, which makes blocking and costuming complex, and the show requires more males than are usually willing to sing in a high school production.  Finally, the sheer epic greatness of the story can make this an intimidating project.

Liz and the school set out to do it right.  That meant being true, onstage and off, to the story’s theme of kindness and unity.  As a Stadium parent, Liz already knew many of the students and teachers, and she wanted the production to embrace the whole Stadium community.  She began a massive recruitment effort, personally inviting students to audition, asking them to bring their friends, asking teachers to encourage students to audition.  When students wanted to participate but had after-school commitments, Liz helped them work out scheduling conflicts.  The message was, “We’re doing something good, and we want you to join us, and together we’ll make it work.”

The result was 84 enthusiastic, committed students—cast, stage crew, musicians and other helpers—showing up after school to rehearse with Liz and with musical director Kerstin Shaffer.  Half of the students had never taken part in a musical before, but they threw themselves into it and learned quickly.  Beyond the cast, the school band, orchestra, French club, photography and design departments contributed their help.

“Students found their niche and a sense of belonging,” Liz says.

The larger community joined in as well.  Stadium parents provided snacks, created a lobby display and, under the direction of parent Tiffeny Stoaks, came up with 150 costumes.  In the Stadium neighborhood, businesses donated money, materials and services.  The giving went both ways.  One day the fifty-member cast showed up in Stadium Thriftway to sing “One Day More,” delighting the clerks and shoppers.

Les Mis’s poignant story gave the directors opportunity to talk with the cast about what it means to care for the poor and disenfranchised.  A canned food drive was organized.  Students came to see their involvement in Les Mis as an act of generosity and compassion.

The buzz at the school was electric.  Excited cast members talked up the show to their friends.  They arranged for music from Les Mis to be played over the intercom in the halls between classes.  High school musicals are not known for drawing crowds, yet when performance week arrived, the auditorium was packed, and at the finale the audience was cheering, whooping and crying.

For Les Misérables, Stadium received nominations in five categories from the Fifth Avenue Theater High School Musical Awards.  This was an honor.  But what, I asked Liz, was most rewarding?

On stage and in hearts, Victor Hugo’s powerful story had been told right.