Peru and its Children 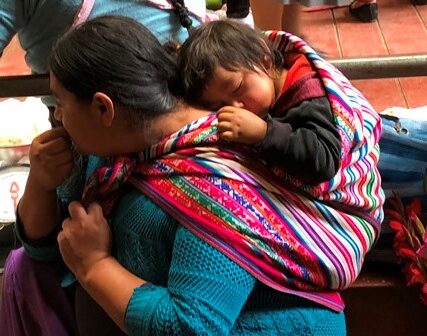 Well, I certainly have been remiss as a blogger. Back in March of 2020 when I returned from 3 months in Peru, I told myself I’d blog about my time there. A year later, I’m finally writing the first post. Better late than never? I hope so!

In December of 2019 my husband, Rory, and I went to Abancay, Peru where our son Brendan and his family live. Brendan and his wife are missionaries there among the Quechua people of the Andes. Rory and I stayed in Abancay through December, January and February, returning home just as covid was beginning to create shock waves here. Our three months in the Andes were a gift. We grew stronger as we walked up and down–literally, up and down–the streets of this mountain town. Our perspective changed as we lived thousands of miles away from U.S. affluence and individualism. Most deeply, our spirits were nourished by spending time with Brendan’s family and by mingling with the Peruvian people. As a mother, grandmother and former teacher, I was especially drawn to the kids. I’ll be writing several posts about Peru, but this one is dedicated to its children. Here are some memories.

Quechua people, especially in the farm villages, are typically small-bodied but very strong. They carry loads on their back, wrapped in a colorful blanket called a q’epi (roughly pronounced “kepppy”). These are used for all kinds of loads (Brendan once saw a man pull a TV out of his q’epi), but one of the most common cargos is children. Not just tiny infants, either; sizable toddlers go in the q’epi as well. Strollers don’t work in the Andes. Q’epis do.

Rory and I went with Brendan and his son Oliver to Layme, a small mountain village. Brendan provided Quechua-language Bible teaching, which the people welcomed. Since it was near Christmas, the town celebrated with a chocolatada, an event serving hot chocolate. And we had watermelon, too. (It wasn’t a combination I was used to, but hey . . .) I enjoyed conversing in Spanish with these girls, who were astonished that I actually spoke ENGLISH. (Significantly, they didn’t ask me why I spoke such funny Spanish.) The village school teaches them a few English words, even though the teachers don’t know the language, and the girls had fun counting with me up to ten.

The Peruvian school year runs from early March until close to Christmas. Schooling is not mandatory but children who attend school begin at age three. When we arrived in Peru, our grandson Oliver was just finishing kindergarten. We got to enjoy his school’s end-of-year Christmas program. Here you see a girl portraying Mary, the mother of Jesus.

The Future of The Town

Shortly before we left Peru, Abancay had its yearly town festival. One morning I went for a walk and found myself surrounded by parading children. They were holding onto a rope, just like my kids did when they were in preschool. These little Abanquinos were probably from a neighborhood day care center. They were dressed in local festival costume–the boys in ponchos, the girls in bright skirts and traditional Abancay hats. The people of this region seem to have a much deeper sense of belonging to a place than we transient Americans do.

My Own Young Peruvians

Brendan and Erin’s three children were each born in Peru, and all three have lived in Abancay all their lives. Olly and Joel have been bilingual from the beginning, speaking both Spanish and English, and they know some Quechua words and phrases as well. Little Lydia is just learning to talk, and she will move back and forth between languages, too. In the pictures below, Olly is holding one of his many bunnies, Joel is playing with a cat who came to visit, and baby Lydia is with her dad, propped in a laundry tub as she learns to sit. These pictures are a year old now, and the children have each grown “in wisdom and stature.” Their lives are changing; less than two weeks ago they left their Abancay home. The family is now settling in Cusco, the Inca capital, where Brendan and Erin will serve the Quechua people in new ways. Olly, Joel and Lydi are learning to love and to serve, as their parents do.

Lydi a year later, at 17 months