This essay (minus the photos) was published under a different title in The News Tribune of Tacoma, February 9, 2015.

In recent years two of my three sons embarked on international life journeys, and in a smaller way, so did I.  My son Brendan and his wife moved to Peru in 2009 as missionaries.  In 2011 my son Patrick and his family left for Yaoundé, Cameroon with the U.S. State Department, and two years later they moved again to Manila.  Meanwhile I was writing a novel set in communist Hungary.  Since 2006, between visiting my sons and doing research, I have traveled to Cameroon and the Philippines, to Peru five times and Hungary three times.  After walking around in countries scarred by poverty or fear, I find myself rethinking our proud American optimism.  We don’t realize how blithely we live.

No matter how we complain about medical costs, Americans can plan on a fairly long life.  What if we couldn’t?  In Cameroon my son Patrick saw African lives ending early: his middle-aged secretary died, and so did the five-year-old daughter of an embassy

mechanic and the baby of the local banana seller.  A sad fact of Cameroonian life is its shortness.  What does this do to a nation’s worldview, encountering sorrow with harrowing regularity and having to say, “If I live, if my children live . . .”?  We Americans don’t realize how much we have, just to be able to assume we will raise our children.

As Americans, we are an entrepreneurial bunch, loving to dream big.  If something is a good idea, it must be possible, right?  Not everywhere.  In Andean Peru, expanded markets for poor farmers would certainly be helpful.  But simply transporting goods can be nightmarish: the roads, where they exist, sometimes wash out in landslides; drivers don’t abide by safety regulations; cops expect 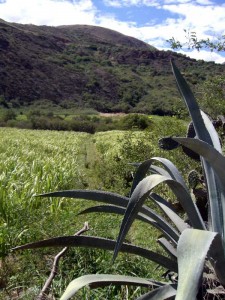 bribes.   So the Andean people carry on with subsistence farming and hope that a bad crop season won’t wipe them out.  In Cameroon trade is even more difficult.  Systems of management and leadership hardly even exist.  As one African told Patrick, “Sir, if you asked me to take ten cows to the top of Mt. Febé (a nearby peak), I could do it.  If you asked me to take ten men to the top, we would never arrive.”

In America we have spent our whole history building up the systems of leadership, communication and infrastructure needed to take almost anything to the top of Mt. Febé, so to speak.  Here, new ideas can be tried out because the basics “work.”  Until I visited places where the basics are despairingly difficult, I didn’t realize how thoroughly American systems have made ingenuity possible.  We can scoff at fear of failure.  Such scoffing is dangerous in cultures where failure is almost inevitable—and very costly.

Whether or not we realize it, Americans are used to believing things will work out.  Not all countries share our optimism.  This became especially clear to me in a recent email conversation with a woman in Hungary.  Her nation has a reputation for pessimism—which is not surprising,  since Hungary’s history is full of invasions, lost wars and 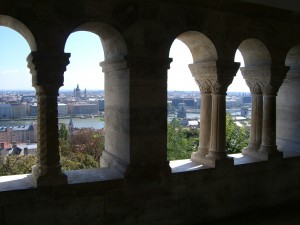 View Across the Danube from Castle Hill, Budapest

unwanted regimes.  My Hungarian acquaintance, Judit, had read the manuscript of my novel about her country.  She enjoyed the story and said it was well-researched and accurate, but it seemed American to her: “optimistic, in spite of the difficulties,” she said.

By American standards, my novel is not optimistic.  The characters give up their dreams.  Yet they manage to create a meaningful life, and maybe that was what Judit was calling optimism.  I prefer to call it hope.   Optimism is based on good circumstances; hope, as Václav Havel said, is based on the belief that life and our deeds have meaning, even when things go badly.  Do we believe that?  If so, then we Americans are people of hope, and that is our greatest gift in this hurting world.