Writing historical fiction is full of challenges, and among the most formidable of those challenges is the research involved.  It’s a huge task. But it’s an interesting one, and if the research leads you to interviewing other people, as my research has done, then one of the most personally fulfilling aspects of the task is the relationships you form through it.  Through interviewing  you discover some of the living souls attached to the information you’re working with.  In this post I’ll share what I’ve learned about deepening research by interviewing people. 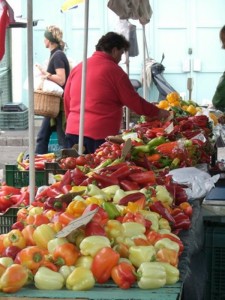 The Market in Kecskemet

If you’re writing fiction set during or after the middle of the twentieth century, there are still people around who lived through the events that form your story.   They are a valuable source of richly personal information.  Much can be said about how to find these people through Internet connections.  But many older people don’t use the Internet, at least not extensively, and it’s best to be open to finding interviewees through word of mouth, perhaps in unconventional ways.

My first interview contact was the author of a juvenile novel about the 1956 Hungarian revolution, The Fall of the Red Star.  I read the book and online I looked up the author, Helen Szablya (www.szablya.com). As it turned out, she lives within an hour of me and is the local representative of the Hungarian consulate.  I also found out through her website that there is an active Hungarian-American association in the area.  I went to one of the association’s events and met Helen there.  She had lived in Budapest during the siege I was writing about, and in spite of the painfulness of the topic she was happy to meet with me and share her memories. 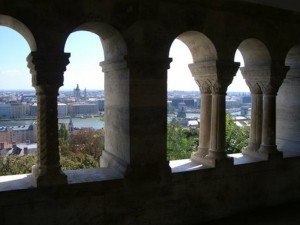 View Across the Danube from Castle Hill, Budapest

Helen also put me in touch with some of her friends, and through the Hungarian association (which I have joined, though my ancestry is Irish) I met others as well.   I began interviewing these people.  I heard incredible stories not only about the war but also about the horrific years afterward.  These Hungarians were willing enough to tell me their memories of the war, but so often their comments ended up shifting toward the early 1950s when Hungary was under Stalinist communism.  Clearly the pain of these years had etched very deeply into their hearts.  Some of the stories they told me were so poignant and so strange and so ridiculous yet true that there was no way not to see fertile fiction material in them.  And the more I tossed these stories around in my mind, the more compelling the possibilities became.  This was how the ideas for my second novel began to germinate.

My Hungarian acquaintances here have been my main contacts, but I’ve interviewed others much farther off as well.  Though it’s a little uncomfortable, I’ve learned to swallow my self-consciousness and just ask people if they’d mind talking with me for a while.  Sometimes these opportunities have come about in circuitous ways:

1.  While I was having a massage for pain in my back, I found out the father-in-law of my masseuse’s sister was Hungarian.  My masseuse put me in touch with him through email.  This man gave me valuable information about farm life in Hungary.

2.  When I was about to travel to Hungary and was buying a skirt for the trip, the clerk at the store gave me the name and phone number of his mother in Budapest.  His mother spoke English, and while I was in Hungary I met with her and with one of her friends.

3.  From looking at a church bulletin board, I got the name of a missionary in Budapest, and he set me up for a very fruitful conversation with a Hungarian pastor and his wife.  The missionary and his wife also came along to translate.

4.  I noticed a man’s Hungarian name, asked about it, and ended up having a very good phone conversation with his father from western Hungary, who now lives in Oregon.

And so on.  Not every interview conversation has yielded as much as I’d hoped.  Some interviews have been frustrating, disappointing, confusing.  I have heard contradictory statements on the same topic, which I suppose is not surprising; these people were speaking from their own experiences, and their experiences were not the same.  Sometimes the memories people related were hazy or inaccurate, perhaps because fifty years had elapsed, perhaps because emotion had interfered with a clear understanding of what happened.  Still, I usually have been able to draw at least one useful story or detail from each conversation—and sometimes, many, many more than that.

I’ve learned to go into interviews with prepared questions, both specific and open-ended.  Some people need a lot of prompting.  Others wander and have to be brought back to the topic at hand.  Some interviewees, however, are surprisingly adept at explaining situations, recalling details and telling stories.  One of the best things about sitting down to talk with someone, as opposed to reading a book, is that you can ask focused questions.  Based on the needs of my stories, I have asked about plumbing, social interactions, expressions, music, the layout of apartments, and endless other aspects of life.  I have heard about how to distill Hungarian brandy at home; I have been coached in how to pronounce and spell Hungarian words; I have been served delicious Hungarian meals.  And since I am still writing, I am still asking questions.  Some of my contacts have become my friends, and (God bless them) they welcome my endless inquisitiveness.

Interviewees are invaluable.  If you form good relationships with them, some will do you the favor of checking your finished manuscript for historical and cultural accuracy.  I showed my first draft of The Bomb Shelter Quintet to several of my contacts.  They were very supportive and liked the story, but sometimes in regard to a scene or a detail they would say, “A Hungarian wouldn’t really do this” or “It would have happened differently, more like this . . .”   Their comments were absolutely essential to my revisions.  Writers of historical fiction, perhaps more than any other fiction writers, have to depend on the help of others.  That has certainly been my experience.

Next post:  The challenge of creating an historical setting