Some people have all the fun.  To wit, my granddaughter, Aydan Grace Connally.  At age 2 months, she has already gone to the beach, gone to parties, gone to graduation ceremonies (OK, maybe that was a little boring), and gone to happy hour at The Melting Pot.  She didn’t even get carded.  On top of all this, she spends hours a day with her friend and “big brother” Jack, who so adores her that it is a major crisis for him when he can’t be there to help change her diaper. 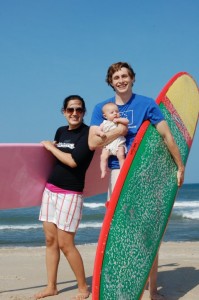 Kim, Patrick and Aydan on the North Carolina coast

Why does Aydan get to have all the fun?

Hmmm.  Well, maybe it’s because she’s the daughter of Patrick Connally.  If there hadn’t been fun in the world before Patrick was born, he would have invented it.  Fun, as C.S. Lewis said, is closely related to joy, and since Patrick has such a predisposition to enjoy life and people, he concocts fun.  And he does it without the stupidity and debauchery that people call fun when they’re basically unhappy.  Here is a sampling of the fun things Patrick has done in his young adult years: