To Peru With Love: A Visit to Lima with Brendan, Erin and Oliver

My son Brendan and his wife Erin are missionaries in Peru.  They live high in the Andes Mountains in the town of Abancay with their little boy, Oliver.  Abancay by no means easy to get to from the Seattle airport, but my husband Rory and I visit as often as we can.  Our most recent visit to Peru did not include the usual tailbone-banging, stomach-spinning drive on Andean roads, however.  Brendan, Erin  and Olly met us in Lima, and there we had a wonderful visit over 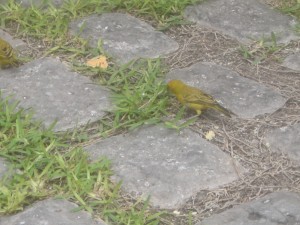 Lima is full of wonderful little yellow birds, who no doubt will have very good luck.

New Year’s.  And I will say up front that Peruvian New Year’s noise rivals anything we do here.  Oh, and you’re supposed to wear yellow underwear on New Year’s.  For good luck.

It was so good to see Brendan, Erin and Oliver.  We stayed at the guest house run by their mission agency, SIM, and while we were there we got to visit with some of their missionary friends as well.  We also attended a Peruvian church with them.  I enjoyed joining in on the singing. 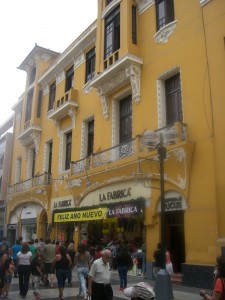 In Peru’s old Spanish-influenced center. Perhaps this building will also have good luck in the new year.

It was a relaxing week for us.  We made many trips out into the city, but since we were sandwiching these adventures between Oliver’s naps, each day had an easy pace.  Lima was enjoying a lovely summer.   The city is on the coast and is very often overcast, but in December it’s warm.  We had some clear days between the clouds.  After Tacoma’s cold rain, the warmth was lovely.

On one of our days we went to the beach.  The water at the Lima beach is fairly cold.  We saw surfers, but they were wearing wet suits.  There was no sand for Olly to play in, but still he enjoyed the little crabs that Rory and Brendan found for him under the rocks.  He also liked seeing the water, which he calls ah-vah (agua).  Olly says both English and Spanish words and seems to use whichever is easier for him to pronounce. 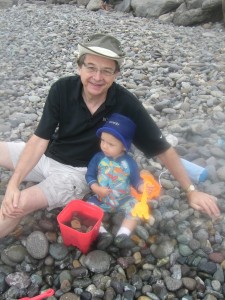 Brendan kept remarking how lucky we were that the traffic, which is usually horrendous, was not bad.  Many people seemed to have left town for the New Year’s holiday.  We got around by taking taxis or buses or by walking.  Only occasionally did we get stuck in the normal Lima honk-like-crazy-while-bumper-to-bumper traffic.  On the buses we were usually able to sit down, but there were a few times we got to experience being vacuum-packed in the aisle.  It’s all part of the fun, if you don’t end up missing your stop. 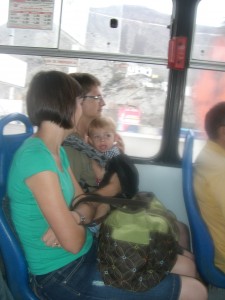 Rory and I have been to Manila, where our son Patrick works for the State Department.  Lima reminded us in many ways of Manila:  traffic (though Lima can’t hold a candle to Manila in that respect), lots of fast food chains, warm climate, layer of grit, Spanish influence in some of the architecture.  Walking was easier in Lima, however.  There are more sidewalks, and in the particular parts of the city we were in, there were parks. That isn’t the case everywhere, however.

In some of the places we visited, the staff spoke a little English, but often not much.  If Brendan and Erin weren’t with us, I used my lame Spanish and generally was able to make myself understood.  I had some nice conversations with Peruvian mamas and abuelitas (grandmas).  They liked talking with me about Oliver and about their little ones.  There is nothing like children to draw people together.  Everywhere we went, people enjoyed meeting little Oliver.  He has an infectious smile, like his mom and dad. 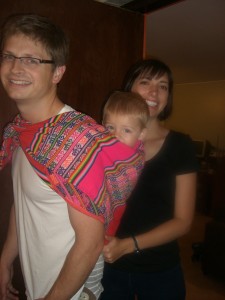 This is the traditional Quechua way of carrying a baby–but NOT the Lima way. One of the Lima men was very surprised to see a gringo dad carrying a blond baby this way!

Rory liked the Museum of Gold in Lima.  It is an amazing collection of gold artifacts, and there are also an overwhelming number of fancy guns and swords given as gifts by visiting dignitaries from far corners of the earth.  We also enjoyed visiting a museum that was built beside a house and courtyard where Simon Bolivar lived for a few years.  My favorite outing in Lima, however, was the day we went to the rocky beach and then walked along the overlook above it: Miraflores, as that part of town was called.  Beautiful.

But my very favorite memory?  Oliver’s delight in Christmas trees and even in any kind of Christmas decorations.  He calls it WOW.  Whenever he said “Wow,” no matter where we were, we would look around and invariably there would be Christmas decorations somewhere.  After we came home, I missed Oliver whenever I saw wreaths or ornaments. “Wow.”  Or in Spanish, I think that would be “Huau.” 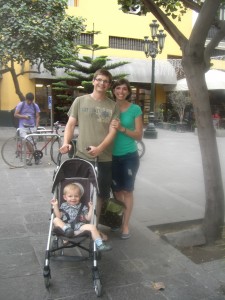