While the rest of the U.S. stampedes to mass arenas for rock concerts, I gravitate toward classical and folk music in small places. Some of my favorite musical experiences have happened in venues not much bigger than a classroom. I love the 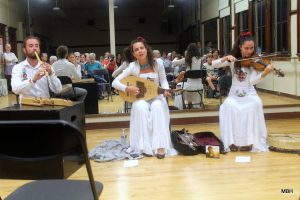 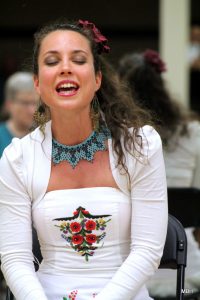 informal rapport that develops as the musicians relax, talk and even laugh with the audience. If the musicians are foreigners and struggle with English, for me it only adds a sense of cross-cultural sharing.

Two weeks ago I attended a joyful concert of this kind. The performers were Tilla Török, Flóra Török and Ádám Török Dancsó, a sibling trio of Hungarian folk musicians. The concert was sponsored by the Hungarian American Association of Washington (HAAW) and was held in the Phinney Neighborhood Center, where HAAW often gathers for folk dancing.  As I arrived for the concert, a farmers’ market was closing up in the parking lot, and artists were displaying their work in the hallway. What a cultural meet-up!

Török Testvérek (the Török siblings) gathered at the front of the room to perform, wearing clothes embroidered in traditional Hungarian patterns. The trio’s repertoire includes music from Hungary and the larger Balkan region. The various group members play violin, zither, different types of flutes and whistles, lute, drum and the Transylvanian gardon (somewhat similar to a cello). All of them sing.  The leader, Tilla, has a beautiful voice. Their music also incorporates the shouted chanting typical of the region. 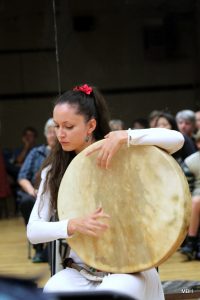 During the concert the musicians introduced each of their songs in Hungarian, and an American translator interpreted their comments. Clearly, the group loves the music and honors its traditional roots. They have been acclaimed for their ethnographic research as well as performance.

Their music exudes a wonderful energy, even in the passionate slower pieces. Because of the whistles and the drum, which is similar to a Celtic bodhran, I was sometimes reminded of Irish folk music.  Yet Hungarian and Balkan music is different, frequently set in a modal pentatonic scale. If you’ve listened to Bartók or Kodály, you get the idea.

I bought their CD, Naphasadás (Birth of the Sun). The music definitely sounds foreign to American ears, but it is vibrant and sensitively 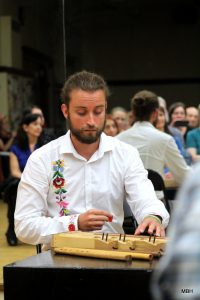 interpreted. My favorite piece on the CD is a deeply compelling Kyrie. This group has done a wonderful job of preserving and adding to the musical heritage of Hungary and the Balkans. Check out their website and Facebook page.

Photos in this post were taken by Márta Horváth.