Happy January! The calendar says it’s time to quit partying and get back to work. Okay, okay. So the Christmas sugar high is over and I’m writing on my blog again. This entry is about the wild adventure my husband and I went on last month.

From December 8-15 Rory and I were gringos in Peru. (And I do mean gringos. Our dishwater coloring, so unremarkable up here, immediately stands out down there.) We flew into the southern city of Arequipa where our middle son and his wife are now living. They attend language classes there (Spanish for Erin, Quechua for Brendan) and will move next summer to Abancay, the town that will be their long-term home. 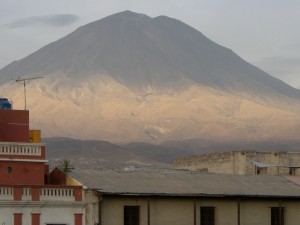 Arequipa is 8,000 feet high, but that’s nothing in Peru. The city is surrounded by volcanic peaks and mountain ridges twice as high as Arequipa. People live not far below those peaks. We took a bus into the mountains, and it chugged along valiantly above the height of Mt. Rainier. Oxygen? Who needs it?

It is summer in Peru, and we loved waking up each morning with the brilliant sun pouring through the low-oxygen sky into our window. Birds sang at 5:30 a.m. Less melodiously, so did the taxi horns. Peruvians get an early start on the day. Their businesses don’t, however, so where those taxis are going at daybreak I don’t know. But they’re not stopping along the way. The Peruvian method for dealing with an intersection is to lean on the horn. 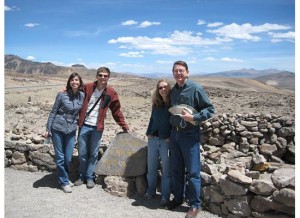 When we were there the school year had not yet ended for the summer. In the mornings we would see children waiting for the bus in their tidy little uniforms. Twice while out exploring places considered to be turistica, we encountered school kids on field trips. One group of ten- or eleven-year-olds enjoyed shouting to the gringos: “Hel-lo!” they called to us. “Gude af-ter-noon!” Brendan guessed this was probably the extent of their English vocabulary. We answered in Spanish. They laughed. Another group, some young girls whom we met in the Colca Canyon, had come down from Lima. We talked with them in Spanish, with Brendan and Erin taking the lead on this. Afterward the girls asked for a photo with us, no doubt wanting to show the folks back home the Norteamericanos they met. 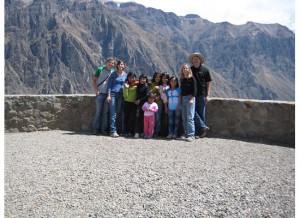 The girls from Lima with their gringos . . . us

That was when I learned the Peruvian version of “Cheeeeeeeeeese!” It’s “Maíz!” (Corn.)

The area around Arequipa gets very little rain. When we were there, the rainy season had not yet begun, so it hadn’t rained in Arequipa since last March. (I am not making this up.) The buildings, whether apartments or small shacks, have flat roofs. People do their laundry on their roofs, and their dogs hang out there. We kept seeing dogs at the roof edges, watching everything as if they were on sentry duty. You had the feeling they considered themselves very important. 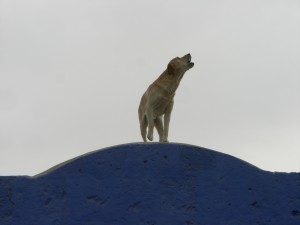 More about Peru in the next blog entry . . .