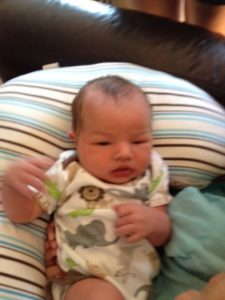 A little more than five years ago, my husband and I became grandparents for the first time.  Since then, a grandchild a year has joined our family, and Rory and I have welcomed each with joy, and with humble astonishment as well.  It is amazing to accumulate such blessings.

Last week on July 8, our sixth grandchild was born.  He is Jude Luke Connally, born to our son Patrick and his wife Kim.  Jude is the third child in the family, the little brother of Aydan and Drake. He is healthy and making an excellent start in life.  Jude was born in Walla Walla, where Patrick and his family are staying temporarily, but in September the whole family will move to Geneva, Switzerland, where Patrick will be working with the U.S. Foreign Service.

Jude and his family live a very international life, as Patrick’s work has taken them to Cameroon, the Philippines and now Switzerland. I miss Patrick, Kim and the children very 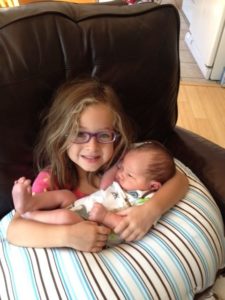 Jude with his sister Aydan

much when they are gone, which is most of the time.  Jude’s cousin Oliver also lives far away, because his parents are missionaries in Peru.  I meditate often on what it means to love and let go, and I am sustained by the knowledge that my sons are doing the work they were called to do.  In a deeper way than I can explain, the world needs the love and wisdom of my sons and their wives and children.

So once again I am in awe over the beginning of a precious new life, and I am grateful for the joy that little Jude is already bringing to our family. 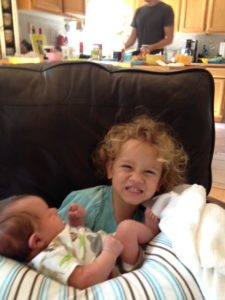 Jude with his brother Drake. (If this photo seems just a little chaotic, well, that’s life with a new baby!)

Oh, and for anyone who would like a quick review of the Connally family’s expansion: