It’s called trial and error, the method by which I learned (and am still learning) to write dialog.

I remember my first slap-in-the-face realization that good dialog is hard to write.  I was an undergraduate (way back when) and I decided to enroll in a playwrighting class.  (By the way, that is spelled correctly.  A playwright is a maker of plays, just as a wheelwright is a maker of wheels.)  I figured writing drama would be easier than writing fiction, because all you had to do was write dialog.  Dialog was more fun than narrative, I told myself.  So I began writing a play.  The fun lasted for about . . . half a page.  Then I read back over the half-page.  Hmmm.  Maybe it had been fun writing it, but it certainly wasn’t fun reading it.  These lines were awkward, banal and dull.  I scrapped them and tried again.  And again.  I began to calculate the credit points I would lose if I dropped the playwrighting class.  It was tempting.  In the end, I did end up carrying on with the class and writing an utterly forgettable play.  But I never forgot the lesson I learned:  Don’t underestimate the difficulty of writing good dialog. 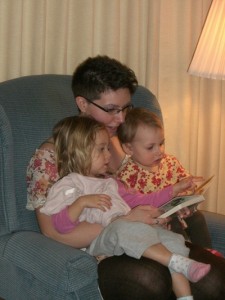 One of the sweeter dialog moments I’ve witnessed–my daughter-in-law Adele with my granddaughters Aydan and Edie.

I can’t begin to guess how many lines of dialog I’ve written since then, but at least half of them have perished with the trash or the delete button.  Others have been shortened or reworded.  In the novel I am just now wrapping up, very few lines have carried over verbatim from the first draft.  And that is all for the best.  Dialog has to be crafted and edited as tightly and carefully as narrative and description, perhaps even more.  Here are some things that I’ve learned about dialog, usually by doing it wrong the first time.

1.  Writing dialog is a great way to get to know the characters, so try writing it as experimentation, and then be prepared to toss it.  In the first draft while you’re figuring out who your characters are, throw two or three of them in a room together, give them some kind of a problem, and make them talk about it.  Or do they talk around it instead?  What do they say?  What do you as the author learn about them?  Reread the scene and look for the lines that make you say, “Yes, that’s him” or “Okay, when she said that, things came alive.”  Then rewrite the scene based on what you’ve learned, and either delete or edit any dialog that isn’t vivid.

2.  Dialog should advance the story, and an author should only use the part of a conversation that moves the story forward.  A dialog scene doesn’t need to start with hello, end with goodbye and include the decision of what to have for dinner—unless, for example, an argument about dinner will show how the tension between the characters has escalated.  Summary narration can be used to move the scene to the point where the dialog becomes important.  For a long time I wasted too much verbiage opening scenes with dialog that seemed like the “natural” way that people would begin a conversation—“Hi, Paul, good to see you” “Oh, hi, Bill, how’re you doing?”  “Not bad, I guess.  Hey, sorry, but I need to ask you why . . .”—and it’s true that what I was writing was “natural” enough.  But not very interesting.  It can be just as natural and more effective to simply jump in with something like, “Later that afternoon by the copy machine Bill asked Paul why  (etc),” and you haven’t wasted time on the preliminaries.

3.  With dialog, you let the characters speak for themselves.  The author’s narrative voice gets out of the way and the reader listens to the characters.  If the dialog is done right, the reader will not only enjoy the change of voice but will know the characters better because of hearing them directly.  What are their individual speech patterns?  How verbose are they?  How is their age, education or regional background reflected in the way they talk?  It is not easy to give each character an individual tone, but it adds greatly to the depth and richness of a story.