When I decided to undertake writing historical fiction, I thought that the hardest part would be finding all the facts I needed and getting them right.  That actually turned out to be doable, though very time-consuming.  More difficult has been finding the small details that make a setting or a scene ring true. 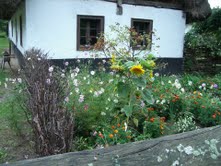 Garden outside a house in the Hungarian folk park of Nyiregyhaza

In some ways writing a scene is like painting.  When you paint, you work with the subtleties of light; you see something, and you show it to the viewer.  When you write a scene, you work with the subtleties of sensory detail, inviting the reader not only to see but to hear, touch and smell.  Doing this well is challenging enough, even when you’re working with a setting as utterly familiar as dinner in your own home.  In writing historical fiction, the difficulty of this amps up like crazy.  Say you’re writing a dinner scene set in Puerto Rico a hundred years ago.  What are your characters eating?  How did they cook it?  What room are they in, and how does it look?  What are they sitting on?  Etc.  Many, many details like this will not occur to you while you are reading the history books that are a large part of your research (and even if they do, you probably won’t find them there).  The need for these details will only surface as you write.  You find out to your dismay that the research you thought was finished . . . isn’t.

The fiction I am writing takes place in Hungary between 1944 and 1951.  So I am writing about a place I have never lived in and a time period before I was born.  I was fortunate enough to be able to travel to Hungary in 2006 and 2007, and this was essential:  you just can’t get a feel for a place without going there.  But during these all-too-short visits I couldn’t see the whole country, let alone absorb it all.  I took as many notes and photos as I could, but the time came when I just had to go home and try to create scenes with what information I had.  This was not easy.  I found that the more I wrote, the more I discovered I didn’t know.  So often when I opened a new scene, I wasn’t sure what to picture.  Even if I had been living in Budapest for twenty years and the city were seeping into my pores every day, I would still have difficulty knowing what to picture on each of its corners during the time period of my novel, World War II and its aftermath. 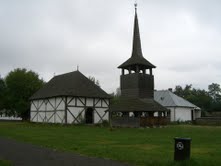 But when I realized that my writing was deficient in sensory details, I became determined to make up for this in whatever ways I could.  I looked at all the photographs I could find from that era, if not from Hungary then perhaps from Poland or Germany, and I scrutinized details in them:  wagon wheels, window frames, clothing, anything.  I read and reread memoirs and novels.  These helped to fill in details not mentioned in history books—things like food availability, common expressions, weather.  I took copious notes on things that would bombard my senses if I were in Hungary during and after the war.  Even if I didn’t know exactly which buildings were burning, could I still describe a smoky sky?  How did it smell?  What would I hear?  After the war, what would it be like to wait at one of the few functioning stretches of railroad track, try to squeeze onto an impossibly crowded train car, and then climb onto the only place there was room—the roof?  What would the view be like from up there?  What would I see growing (in spite of all the destruction) in the fields between towns? 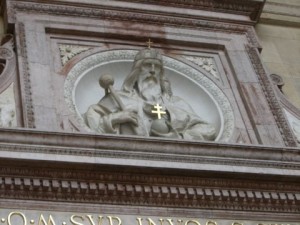 Even aside from the changing setting created by a war, I found that by really watching for details in Hungarian novels and memoirs and (less easily available) appropriately set movies, I could create scenes of European rooms, markets, farms, shops.  It has taken an enormous amount of attention, however.  I have to remind myself constantly to create a vivid setting—because the milieu of a place I don’t live in will not arise in my work unless I intentionally call it forth.

But that sense of exploring a different world is part of what makes historical fiction so satisfying—to readers, yes, but especially to the writer.

P.S.—–BTW to readers:  if any of you can give me information on WWII damage to specific buildings and areas in Budapest, I would love to hear from you.  Thanks!