A Trip to the Peruvian Amazon, Part 1 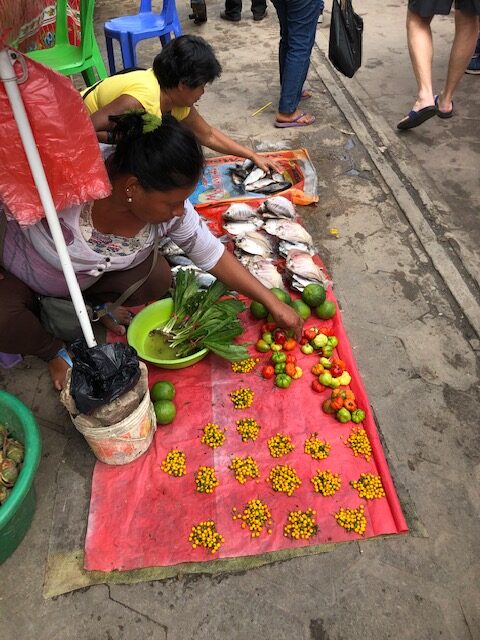 In January of 2020 I took a trip to the Peruvian Amazon with my husband Rory and with close friends Ruth and Alan Tiger. The Amazon region is incredible: almost unbearably hot and humid, often inaccessible except by boat, and amazingly beautiful. The city of Iquitos, where we began, is one of those inaccessible places. In this photo, I’m half a block from the hotel where we stayed, just up from the banks of the river.

Iquitos has a population of almost 500,000. It is the largest city in the world that you can’t get to via roads. You have to arrive by plane or boat. Oh, there are some cars in Iquitos, but only for driving within the city, and there aren’t many of them. If you need to get around, hail a “mototaxi,” which is like a rickshaw attached to a motorcycle. They’re everywhere in Iquitos.

A Trip to the Iquitos Market

The outdoor market in Iquitos was like nowhere I’ve ever been. There were vast quantities of fish and tropical fruits and vegetables, many of which I had never seen before and certainly not eaten . . . such as the skewered grubs below. The guide who was showing us around said they taste like coconut because of what they eat. I have to admit I didn’t sample this delicacy.

A lot of cooking went on at the outdoor market, and people bought things like grilled fish for their lunches, as you see in this photo. People do eat piranhas, which are common in the Amazon but often quite small.

But what’s front and center in the picture is an alligator head. I don’t think it’s for sale. It’s more like a security guard, you know.

After leaving the Iquitos market, we got on a long, open air boat and travelled upriver for about an hour and a half to the lodge where we would stay for next few days. The river is unimaginably huge. It spreads in every direction. Sometimes you think you’re on the main track of the river, but no . . . you’re only on a thread of it. As we travelled, we passed villages and settlements that line the river, and we saw many small boats going up and down. Some of them are water taxis, the only way people in this area can travel. Trying to go through the dense forest is not only difficult but at certain times of year impossible because of flooding.

This boat (left) is the one we travelled on. It was motorized and stocked with life preservers. We were grateful for the shade of the roof, because the sun was intense. The photo below shows a Peruvian man with a much smaller boat. We saw him using it to go back and forth on small stretches of backwater. For longer trips he would go out to the river and catch a water taxi.

So we arrived at our lodge, which had monkeys in the rafters and frogs beneath the floor, and we slept under mosquito netting. For the next couple days we experienced the life of the Amazon throbbing around us.

Next post: parrots and piranhas and life along this incredible river