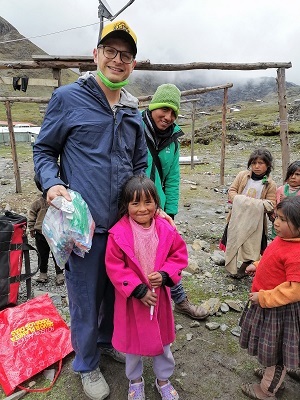 Earlier this year I wrote in this blog about Peru (https://conniehamptonconnally.com/a-trip-to-the-peruvian-amazon-part-1/https://conniehamptonconnally.com/a-trip-to-the-peruvian-amazon-part-ii/ https://conniehamptonconnally.com/peru-and-its-children/), where my son Brendan and his wife Erin are missionaries, and where I have visited numerous times. Today as I write this I am visiting Peru again. My husband (Rory) and I are here for two months, this time living at a dizzying altitude. Brendan and his family have moved to Cuzco, the former Inca capital, eleven thousand feet high in the Andes. The air is so thin here that the newcomer can feel sick, especially with any kind of exertion. Rory and I have gasped and ached just climbing a single flight of stairs. Meanwhile, the Andean natives around us carry heavy loads long distances uphill and think nothing of it. Indeed, every time I come here I’m amazed by the toughness of these compact and extremely strong people, the Quechua.

Brendan and Erin have lived in the Andes for 12 years. They speak both Spanish and Quechua, the indigenous language. Brendan especially committed himself to learning Quechua fluently, and he has preached and taught in that language many times. He is a linguist and a Bible teacher, and Erin is a dentist. When there is opportunity, they pack up mobile dental equipment, go into remote Quechua villages with Peruvian colleagues, and practice dentistry and teach the Bible. This ministry has been very well received.

A week and a half ago Rory and I stayed behind with their two young sons while Brendan and Erin and some colleagues left town for a weekend clinic. It was in the Nation Q’eros region, one of the most remote places they’ve ever ministered. They took Lydia, their two-year-old daughter, with them. It was fascinating—and a little overwhelming—to hear their report when they returned. Here are some of the things they told me:

The Quechua people of Nation Q’eros live at an altitude of 13,000 feet. That’s almost as high as the summit of Mt. Ranier, and their lives reflect the tough environment. At lower elevations, Quechua people build their houses of adobe. They grow green vegetables, potatoes, corn and beans. Their livestock may include sheep, alpacas, pigs, chickens, guinea pigs or cattle. They most likely speak Spanish in addition to Quechua, or perhaps instead of it. But for the people of Q’eros, life is much more isolated and difficult. Many speak no Spanish. Their only crop is potatoes, because nothing else will grow there. Their only livestock is alpacas, which can eat the sparse moss-like vegetation. They raise the alpacas mainly for the wool. (Brendan saw both men and women spinning.) The people eat alpaca meat, but certainly not daily, and much of the time, all they eat is potatoes. Because of this, they are noticeably smaller than the Quechua of lower elevations.

These people don’t build their homes of adobe, because the soil is so shallow. They use stone. Because of government assistance, each house has a small solar collector. This provides enough electricity for one lightbulb and the charging of cell phones, which they use via satellite transmission. Many of the men in this region work on government projects, such as roads. They may drive motorcycles.

On the weekend trip to Q’eros, Erin was delighted that six other dentists went along, as well as dental assistants (Brendan one of them), rural pastors, and others who helped with patient intake, childcare, translation, and whatever else was needed. The team consisted of 19 people total, all of them Peruvian except Brendan and Erin. They drove seven hours (including a flat tire stop) to the Q’eros region, where about 1,000 people live spread between five villages.

This was mid-November, which is the rainy season and almost summer in Peru. But nothing is warm at 13,000 feet. Snow lay on the ground. The small buildings where the team practiced dentistry, slept, and led a church service were completely unheated. (Quechua people do not heat their homes, and in fact many spend most of their time outdoors even in bad weather.)  So Erin and her colleagues just bundled up and worked on teeth in the cold. Over a Friday afternoon, all day Saturday, and Sunday morning they saw about 120 patients. Many of the people had walked for hours to get there. Most had never been to a dentist before, and some were experiencing pain because of dental infections. Many teeth were extracted and antibiotics handed out.

Although it’s always too bad when people lose teeth, Erin says that in situations like this it’s better for their overall health, and the people are always grateful for the relief of pain. At these clinics the team members give the people toothbrushes and show them how to take care of their teeth. Very often this is new information for the people. In the 11 years that Brendan and Erin have been involved in dental ministry, they’ve often made repeat visits to villages; and when they’ve done so, they’ve seen improvements in the people’s dental health. They’ve also enjoyed building relationships with the people.

On the Saturday night of the clinic weekend, a church service was held. Believers in this area first began meeting for prayer and worship two years ago, and now the church consists of about forty people. One of the people most remarkably influential in the spiritual life of this community is a man named Julio, who became a believer by reading the Quechua Bible completely on his own, and Brendan was struck by Julio’s commitment to understanding Scripture. At the church service that weekend, Brendan preached in Quechua, drawing from the parable of the sower. The people received the message gladly. Brendan has often noticed how the agrarian Quechua relate very directly to Jesus’s agricultural parables; it’s as though those stories could have been told in their own fields.

Brendan and Erin came home very tired from their long weekend of work. But they were grateful they’d been able to treat so many patients and to encourage people spiritually. The people want them to come back, and they will.